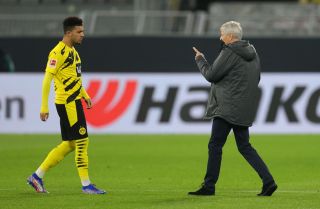 The England winger was subject to speculation all summer long over a move to Old Trafford, but a deal between the two clubs never materialised and he stayed put at Borussia Dortmund.

It’s likely to be his final season at BVB but a recent report from 90min suggests United are ready to try again for Sancho this January.

United are said to want the deal wrapped up before the European Championships kick off, but it is not known yet what the player wants to do, whether it’s bide his time and wait to see what offers he will attract after the competition ends?

Sancho hasn’t enjoyed the best of starts to the season, with German press suggesting his head is elsewhere after months of speculation (via Bild).

It goes without saying that Sancho would be a major upgrade on other players we have to play on the right wing. I would go as far to say Daniel James and Jesse Lingard are playing for their United careers at the moment.

I would be shocked if United signed Sancho or any player valued at £100m+ in January.