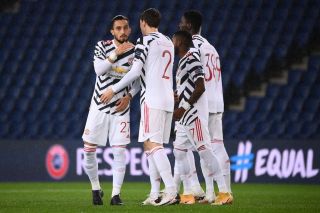 A statement from Manchester United read: “The club is checking on the situation regarding Alex Telles and will assess the defender upon his return to Manchester from international duty later this week.

“Reports in Brazil have suggested Telles has tested positive for COVID-19 for a second time and could therefore miss his nation’s match against Uruguay in Montevideo on Tuesday night.

“However, it is understood Alex’s positive test does not necessarily mean he has contracted the virus again.

“United’s medical staff at the Aon Training Complex are monitoring the situation in Brazil and will make an assessment when Telles returns to England later this week.

“It is still hoped our recent signing from FC Porto will be available to play in Saturday’s Premier League match against West Bromwich Albion at Old Trafford.”

Hopefully Telles will be available for selection for the game this weekend.

The 27-year-old offers an attacking threat down the left flank which will be intriguing to see with Luke Shaw out injured for a month.

Telles will be determined to play too, as he’s only made one appearance for United since joining in the summer.

These fans are hopeful Telles will be fit and ready to take on West Brom.

We can only hope pic.twitter.com/2xElbfiUQV

I beg he hasn’t got it