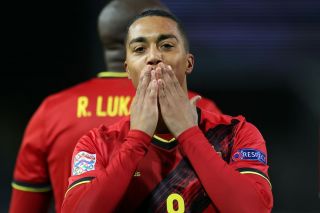 Speaking to Het Laatste Nieuws (H/t Manchester Evening News), Degryse said: “He needs to grow to the level of De Bruyne. And in a few years’ time go to a club with more name and fame than Leicester — even thought they are now in the lead.

“Tielemans belongs to a team that plays for a Champions League ticket every year. That is possible in the Premier League. In one of the two Manchesters, for example.”

Although the Belgian was linked with a move to Old Trafford in the past, with Sky Sports claiming Tielemans favoured a switch from AS Monaco to the King Power Stadium.

A very good player but this isn’t a transfer story we see having legs.

In fact, I think if United were to sign a midfielder in January or next summer it should be a defensive option to offer greater protection in front of our defence. Arsenal did great business last summer signing Thomas Partey from Atletico Madrid.

We’re still a better side when Nemanja Matic plays but he can’t be expected to play every week at this level because it begins to show in his performances at 32-years of age.

Tielemans has played a deeper role this season and Leicester are flying it in first place after 8 matches played. According to FBred.com, in a more defensive role he’s making more tackles and interceptions, while pressing less often but more successfully.

Is Tielemans the midfielder United should look to next summer?