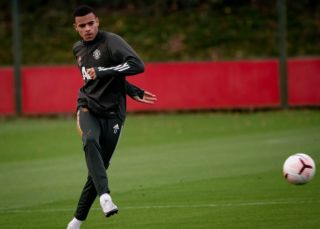 Mason Greenwood was spotted training at Carrington on Monday.

The picture below (courtesy of Manchester Evening News) saws Greenwood training after missing out on a place in the squad in the win over Everton.

Greenwood also missed out on a place in the England senior and U21 squads following a conversation between United manager Ole Gunnar Solskjaer and Gareth Southgate, as per The Athletic.

According to the MEN, Greenwood trained with some of the first team on Monday which will please United fans.

Stretty News understand Marcus Rashford is a doubt for United’s next game due to a shoulder problem, so this would be a good time for Greenwood to step up to the plate like he’s done in the past.