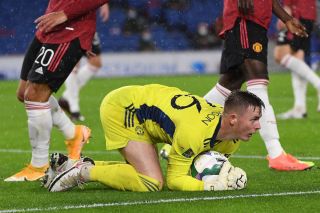 Dean Henderson can’t get a look in at Manchester United with David de Gea first choice between the posts, so a decision could be made in January which will likely see Hendo move out on loan again.

That much has already been reported by ESPN — that United are open to loaning the goalkeeper again — which could see Sergio Romero stay at the club until the end of the season as second choice.

We can’t get ahead of ourselves with De Gea’s form, though. It’s interesting that he has almost lost his place as Spain No.1, but I won’t criticise his performances since the 2020-21 campaign began.

The defence needs tweaking and we knew that in the summer, although nothing was done to fix it.

People will always ask the question about when it will be best to throw Henderson in ahead of De Gea, but an answer is impossible at this point. I’m sure the time will come but just not now.

Henderson proved himself as one of the best shot-stoppers in the Premier League last season, which doesn’t add up when you consider he’s only made 3 appearances this season from 12, across all competitions.

A somewhat surprising destination spot for Henderson has been touted today.

According to a report from 90min, one ‘option’ for Henderson ahead of the winter transfer window are Scottish champions Celtic.

The news comes after a difficult start to the season for Neil Lennon’s men, but perhaps installing a goalkeeper like Henderson could help.

A source close to the situation is quoted as saying: “United appreciate Henderson staying put but they know he is now being held back and needs another loan, although that may not be easy but they are willing to work hard on securing him a move.”