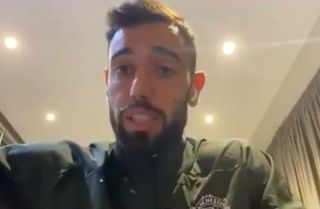 Few signings have made such an impact in a short period at Old Trafford and Fernandes shares a special connection with the club he has only been at for 11 months.

Fernandes demands respect on and off the pitch and never settles for second best, which makes him such a ruthless leader and teammate.

The indispensable Portuguese playmaker was not firing early on in the campaign, but his triple goal contribution against Everton before the international break that alleviated pressure on Ole Gunnar Solskjaer will breed confidence.

Despite Bruno’s efforts, United remain 14th in the Premier League table with just 10 points from seven games and a run of results is crucial over the congested fixture period through to the New Year.

Fernandes was asked about his amibitons for the next few months and reiterated his stance about a desire to win every trophy the club takes part in.

The 26-year-old highlighted the club’s history of success and believes the seven-year wait for a Premier League title has been too long.

Listen to the Portuguese Magnifico explain his ambitions below, via the UTD Podcast.

🎙 It's time for the first snippet of @B_Fernandes8's UTD Podcast 👀

Here, our Portuguese magnifico tells us about his ambitions at #MUFC! 🔴⚪️⚫️ pic.twitter.com/cH2Zz4i7QX