Manchester United are reportedly sweating on the fitness of Anthony Martial after back problems forced him to train separately from the France squad.

Martial played 78 minutes for France in their 1-0 Nations League victory over Portugal on the weekend but missed some chances that would have frustrated him.

The forward had been in line to retain his place in Didier Deschamps’ starting XI against Sweden on Tuesday but his availability has now been thrown into doubt with reports over fitness troubles.

According to the Metro, Martial has been nursing back problems over the last few weeks and wasn’t involved in France’s main training session on Monday over concerns he could aggravate an injury.

These reports are supported by RMC Sport journalist Loïc Tanzi , who noted that he trained separately on Monday evening at the Stade de France.

Martial is yet to find his stride in this campaign for United after his three-game suspension for a petulant red card in the humiliating home defeat to Tottenham last month.

He has netted two goals in the Champions League so far but hasn’t scored in the league this term.

And another setback could be hugely frustrating for United manager Ole Gunnar Solskjaer ahead of a congested fixture schedule after the international break.

Of course, the extent of Martial’s issue is currently unclear and it would be beneficial to leave out the 24-year-old against Sweden, even for precaution.

We will provide you with any updates on Martial’s possible injury concern as we get them at Stretty News. 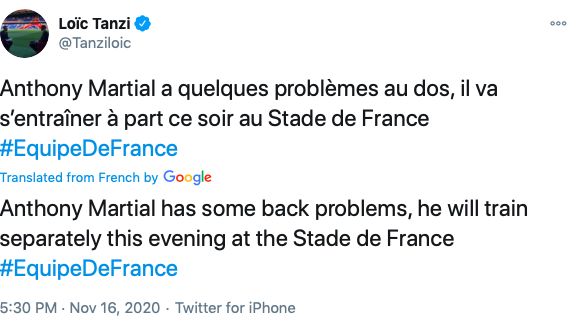