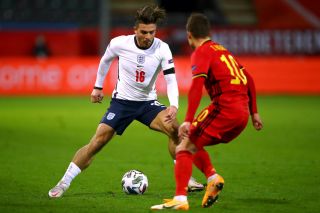 England’s hopes of Nations League success ended with a 2-0 defeat to Roberto Martinez’s side on Sunday evening.

But Aston Villa talisman Grealish was comfortably the best player on the pitch on his first competitive start for the Three Lions and United fans reiterated their disappointment at the failure to sign him this summer.

Grealish is finally earning widespread recognition for his talent and is one of the most in-form players in the Premier League right now.

The 24-year-old has been totemic in Villa’s tremendous start start to the campaign, netting four goals and adding four assists in seven league games.

Of course, there was plenty of speculation surrounding Grealish’s future this summer and United were one of a number of clubs linked with his signature.

According to the Manchester Evening News, United did hold an interest in the Villa captain but no concrete talks were held and Donny Van de Beek became the club’s first major signing.

It is added, however, that the under-utilised Dutchman was not viewed as a direct alternative to Grealish.

United’s frustrating failed attempts to sign Grealish’s England teammate Sancho were well-documented this summer and supporters are unsurprisingly rueing the club’s decision not to focus on Grealish instead.

Though they’re at different stages of their careers… We should have gone all out for Grealish, rather than Sancho. #MUFC

Grealish gives you penetration between the opposition lines. He goes past people and has great feet. Would add so much to #mufc cos we don't have anyone who does that (our attackers need space/pace). Proper pissed we didn't go all in for him. More so than Sancho.

We could’ve signed Jack Grealish for £80m but instead we chased Sancho for £120m and ended up with neither pic.twitter.com/awzvNdpga8