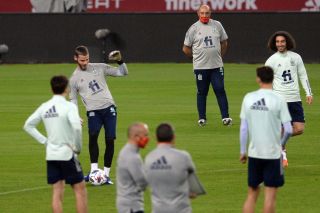 There’s uncertainty over who will be Spain goalkeeper for the long-term future.

Speak to anyone at Stretty News, though, and they will tell you David de Gea should be No. 1. Perhaps a little bit of bias there.

Spain manager Luis Enrique gave a cryptic response when asked about his keeper selections and has claimed that he knows who will be placed between the posts this week against Germany in the Nations League.

However, Enrique has yet to inform any of the three goalkeepers in the current Spain squad which of them will be selected.

Athletic Bilbao’s Unai Simon was selected against the Netherlands and Switzerland this week — his first international caps. The others are both Premier League shot stoppers; De Gea and Kepa Arrizabalaga.

“I like to see ambition and desire in training, that is what I ask of the players,” Enrique said in his pre-match press conference (via Marca / translated by Football Espana).

“I have decided who will play tomorrow, but they will find out an hour and a half before the game. As always, I don’t know what will happen in the future, that could be a goalkeeper with more continuity or a permanent one.

“I think goalkeepers must always be prepared to help, whether or not they are on the pitch. I ask goalkeepers, in addition to their technique and their passing game, to be committed and work on improving, and I think all three comply with that, then it is time to choose.”

De Gea has played well for United this season — not committing howlers like he did last term — but that doesn’t excuse how rare we’ve kept receipts. Keepers must take some responsibility in organising whoever is in front of them, so we can’t pretend that he hasn’t been better in the past.

I hope De Gea gets back in the Spain team, at back to his best for United.