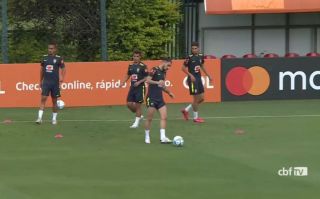 Manchester United left-back Alex Telles is away on international duty with Brazil despite not playing much football recently having tested positive for COVID-19.

On Sunday it was reported (via Manchester Evening News) that Telles would undergo another COVID-19 test on Sunday before a decision could be made on whether he can travel to Uruguay with the Brazil squad.

Telles came off the bench on Friday night as Brazil beat Venezuela 1-0.

But Brazil called up Guilherme Arana as cover for Telles because whose participation has been distracted due to so many doubts over his situation.

However, Telles was spotted training with his Brazil team-mates which must be good news for United fans. We would like to see him get a consistent run in the team prior to Christmas, which has not been the case for United in terms of results this season.

He tested positive for COVID-19 in October while at United and missed two weeks of training as a result.

The Brazilian Football Federation (CBF) have released a statement on their website saying Telles “tested positive,” and now they are trying to find out whether it’s a new test or that he has to test negative again.

A CBF statement read (via : “Arena was called on to form the Brazilian squad after left-backN Alex Telles tested positive for Covid-19. The player had contracted the virus while still in his club, Manchester United, and must now show he is safe on arrival to Uruguay.

“A new examination will be carried out with the entire delegation on Sunday (November 15). If the test result is again positive, Alex Telles will be recalled [to Manchester United.”

One response to “Photo: Alex Telles trains with Brazil despite doubts over COVID-19 test”