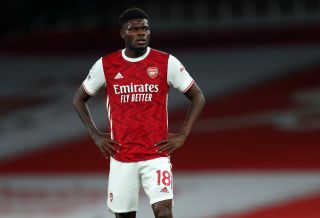 Arsenal made a very good signing this summer, with Thomas Partey signing from Atletico Madrid.

Former Gunners striker Emmanuel Adebayor has revealed he urged the midfielder to overlook Manchester United — instead advising him to join Arsenal.

Mikel Arteta landed the 27-year-old in a move worth £45m, but there was never reports that United were trying to hijack the deal, so it can’t be painted as though Partey snubbed to Reds.

By meeting the player’s release clause Arsenal got their man, surprisingly without much competition.

Adebayor, who spent three years at the club, has admitted that he spoke to the Ghana international before his switch to the Premier League.

“He told me that some clubs in England namely Arsenal, Chelsea, Manchester United, and others have shown interest in him and he needs advice,” Adebayor said at an event in Ghana, as quoted by GOAL.

“I advised him to go to Arsenal because I have had the opportunity to play there and I think it will be good for his development.

“Arsenal is more than a club, it is a family and I’m impressed with his performances so far in the Premier League.”

If you haven’t already noticed, the striker’s comments show a degree of hypocrisy after claiming he still had a hate for his club after controversially joining Man City.

He joined City in 2009 and infamously celebrated against the Gunners by running the entire pitch just to jeer their fans.

Do you think United should have made a move for Thomas Partey? Have your say below.