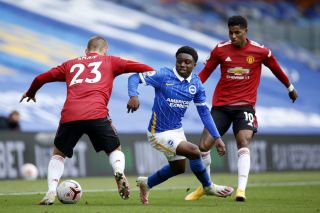 If Manchester United are to play a diamond with the players currently available there is bound to be a strong reliance on our full-backs to push forward to provide width.

The problem at right-back is Aaron Wan-Bissaka isn’t very good at attacking and struggles to cross the ball.

Brighton wing-back Tariq Lamptey could offer the Reds a solution.

He is relentless with his attacking intent but can also defend pretty well, so it’s understandable that some of Europe’s biggest clubs would show an interest in securing Lamptey’s signature.

Mundo Deportivo have recently looked at his situation, also noting interest from Atletico Madrid, and it is now being suggested that Wayne Rooney has urged United to make a move to sign him.

I don’t think right back should be a priority right now because I’m happy with what Wan-Bissaka offers defensively. There is not a full-back out there who is better defensively than the United man, and that is his first job back there.

It could be a different story on the left-flank. Luke Shaw has shown improvements but we really needed someone with more attacking intent. That’s why Ole Gunnar Solskjaer signed Alex Telles from FC Porto.

However, we are awaiting news on a COVID-19 test for Telles who is away on international duty.

It is interesting that Atletico Madrid are supposedly looking at Lamptey because he doesn’t exactly fit the mould of a defender that Diego Simeone tends to look for.

Though I’m sure the same could be said for former Tottenham star Kieran Trippier.