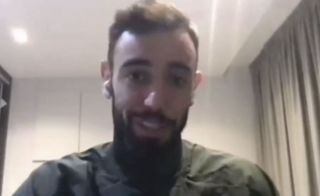 Manchester United midfielder Bruno Fernandes had the club’s official podcast panel in stitches after recalling a hilarious story about how he’s fiercely competitive even when it comes to playing board games with his three-year-old daughter.

Fernandes, 26, joined United from Sporting Lisbon in January but has more than hit the ground running after being directly involved in 31 goals in just 33 appearances in all competitions.

Speaking exclusively on United’s official podcast show, Fernandes admitted just how competitive he is as he went onto recall a hilarious story about what it’s like playing popular family game ‘Uno’ with his three-year-old daughter.