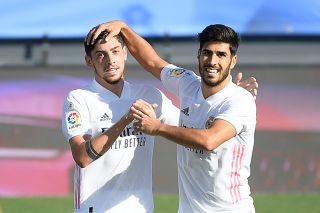 La Liga giants Real Madrid have reportedly made a shock U-turn in their original decision not to negotiate a swap-deal which would see star-midfielder Paul Pogba join Los Blancos and Federico Valverde go the other way.

According to a recent report from Don Balon, Zinedine Zidane’s Madrid, who were previously opposed to the swap-deal have now changed their minds and would consider letting Valverde depart in favour of Pogba.

Suggestions that Pogba and Valverde could be set to trade places are not the first time fans have been presented with the idea after The Sun ran a similar report less than three-months ago.

The young midfielder has featured in 80 matches in all competitions for Real Madrid but only has 11 direct goal involvements to his name and Don Balon claim that Zidane’s patience in the 22-year-old has finally run out.

Elsewhere, it goes without saying that Pogba’s dip in form is never under-reported, however, with less than two-years left on his current deal after the Reds’ hierarchy recently triggered an extension (Manchester Evening News), the Frenchman’s time at Old Trafford looks certain to be coming to an end.

Would you take this swap-deal? – Let us know in the comments.