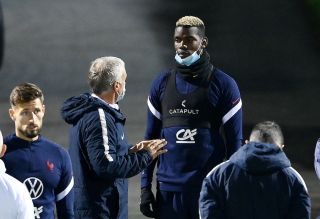 The biggest problem with Paul Pogba is that he, quite clearly, only listens to people who pay him compliments. While away on international duty he decided to air his negative views on Manchester United again while heaping praise on the France national team.

Pogba says he is currently going through the most difficult spell of his career due to concerns over his playing time at United. Manager Ole Gunnar Solskjaer has dropped the 27-year-old on a number of occasions this season but not enough as his performances have been well below par.

France lost 2-0 against Finland at the beginning of the November internationals, ending the World Champions’ 12-match unbeaten run, and Pogba was below average again. They beat Portugal on Saturday night and his performance was far from spectacular. How convenient for him to ignore that — and use an interview while away with France to slag off his employers…

He’s still made 10 appearances across the Premier League and Champions League for the Red Devils, but only made the starting XI on five of those occasions. That is quite a fall from grace when you consider how so many people are of the opinion that Pogba is one of the best midfielders in the world, despite the fact he has so rarely backed up those claims in a United shirt.

United sit 14th in the Premier League table but that is not Pogba’s fault. Winning football matches is a collective effort but I am beginning to feel that the Frenchman is a hindrance at Old Trafford.

Pogba played a part in France’s Nations League win over Portugal on Saturday night, and he admits that he is relieved to be with the national team as it has given him a break from his problems at Old Trafford.

“I had never known such a difficult period in my career,” Pogba told RTL (H/t Fabrizio Romano).

Paul Pogba to RTL: "This is a period I've never experienced in my career. The French national team is a breath of fresh air… we are very happy to come here. It's not the same as with the club. We all group together, it is magical". [@GFFN] 🔴🇫🇷 #MUFC #France #Pogba

“The France team is a breath of fresh air, the group is exceptional, it’s magic.”

The last time Pogba went on international duty he was quoted by The Guardian as saying it would be a ‘dream’ to play for Real Madrid. We acknowledge that is the ultimate dream for most footballers, but Pogba is one of United’s highest earners and his lack of respect for the club is insulting.

I have defended Pogba many times over the years, however, he has long crossed the line.

Go check if Real Madrid want you in January…