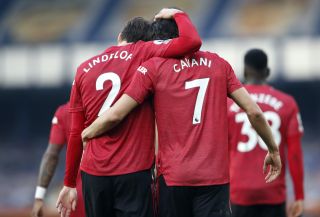 Manchester United striker Edinson Cavani will be hoping he doesn’t have to isolate under COVID-19 regulations after Uruguay team-mate Matias Vina tested positive for the novel virus.

Cavani, 33, joined United earlier this year on a free transfer after the elite striker’s contract with Paris-Saint Germain expired earlier in the year, the deal was confirmed on ManUtd.com.

After being forced to miss a handful of games upon his arrival due to being required to isolate, Cavani was understandably eager to get going and it didn’t take the South America long to open his United account.

On his fifth appearance in all competitions against Everton a week ago, United’s new number-seven scored the fourth goal of the Premier League game at Goodison Park to put the tie out of the Toffee’s reach.

Now on international duty with his native Uruguay, Cavani played an integral role in his country’s recent 3-0 win over Columbia after opening the scoring after just five-minutes.

However, the South American striker will be fearing he may be forced to isolate again after compatriot and team-mate Vina tested positive after the squad’s latest rounds of testing.

The announcement was made by Uruguay’s official footballing association.

The statement directly translates to: “The Uruguayan soccer association reports that the swabs corresponding to all the members of the senior team have been carried out at the time of arrival to our paid team, resulting in the fact that the player Matias Vina has tested positive, while all other team tests are negative.

“Matias Vina is in good health and has already been placed in isolation and quarantine since midnight yesterday, as soon as the situation became known, in strict compliance with the procedure established for these cases.

“The other members of the Senior National Team continue training normally for the next official on Tuesday against Brazil.”