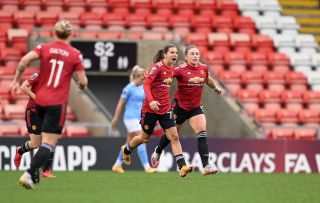 Manchester United Women came back from a 2-0 deficit against Manchester City on Saturday to keep their place at the top of the WSL table.

USA forward Tobin Heath scored as did substitute Kirsty Hanson to seal a 2-2 draw for Casey Stoney’s side.

Heath’s goal was a screamer to make it 2-1, with United fans on social media suggesting it’s already a strong contender for goal of the season.

See below for the reactions the goal got via Twitter:

When she grabs the badge and shouts “come on” 👌👌👌mega

When she grabs the badge and shouts “come on” 👌👌👌mega

Arsenal have a game in hand on United — knowing a win would move them to first in the WSL table.