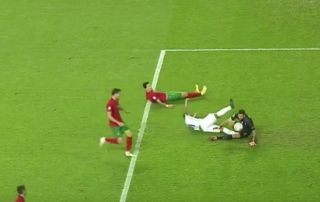 We shouldn’t laugh, but we’re going to!

In the second-half of tonight’s UEFA Nations League clash between Portugal and France, there was a moment that saw Wolves goalkeeper Rui Patricio rolling around the floor in agony.

When a low cross came in from the left flank, directed towards Anthony Martial, the Manchester United forward went to ground in attempt to win the ball.

Unfortunately for Patricio, Martial missed the ball and crashes into his privates instead.