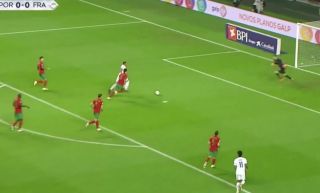 Portugal and France is the biggest match of the night in the UEFA Nations League.

Manchester United midfielder Paul Pogba started the move with a drilled pass that split Portugal wide open. The ball found Anthony Martial who found himself in a one-on-one situation with Rui Patricio after some brilliant link-up play with Antoine Grezimann.

Martial should be scoring in this position but hopefully he will get the chance to make amends before the break.

Either that or Bruno Fernandes gets his name on the scoresheet. The United talisman gave a wonderful diagonal pass to Joao Felix in the early stages.