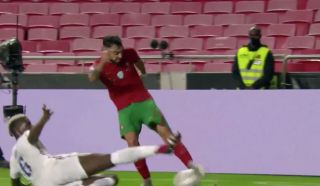 It’s goalless at half-time between Portugal and France.

France have been the better side and have created far more chances than their opponents on the night.

Didier Deschamps’ side are trying to respond to a recent 2-0 defeat at the hands of Finland. Although Portugal are a much better side, the French look good with Barcelona’s Antoine Griezmann pulling the strings in the final third.

There was a point in the first half when I feared the worst seeing Paul Pogba slide in on Bruno Fernandes.

Obviously the anxiety stemmed as both play for United and Fernandes is our best player. With Pogba’s track record of late (conceding *that* penalty against Arsenal), I wasn’t ruling out the possibility of the Frenchman injuring his United teammate.

Thankfully it was a clean tackle. Well won and nothing came of Portugal’s corner kick.

Check out the tackle – pictures via Sky Sports Football