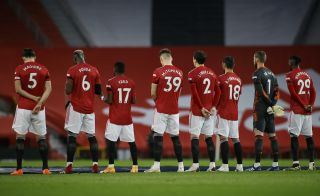 A tribute banner to Nobby Stiles will be unveiled at Old Trafford for Manchester United’s upcoming Premier League fixture against West Brom.

The domestic season is currently at a standstill due to the international break — but Stiles was not only a successful member of United teams.

Ultimately, Stiles was a key part of two famous sides, England’s triumphant class of 1966 on the international stage and the United team which made history by winning the European Cup two years later.

Stiles passed away on 30 October, 2020, and everybody connected with Manchester United is still saddened by the loss.

Stretford End Flags has revealed a graphic of a classy tribute banner which will be unveiled when United take on the Baggies. It reads: “Nobby – Manchester Born and Red”

A Nobby Stiles tribute banner will be in place on the Scoreboard End for the #mufc v West Brom game. The final banner design was chosen by Nobby's grandaughter and we hope it will be a fitting tribute to one of our clubs greatest players. More tributes at https://t.co/Cf15gj7SLj pic.twitter.com/uFmln7jRFX