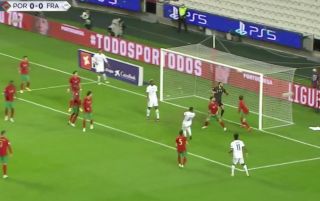 Anthony Martial could have two goals to his name already.

We are still in the first-half in Portugal with the both sides yet to open the scoring.

Manchester United striker Anthony Martial was played in brilliantly by Antoine Griezmann after a stunning through ball from Paul Pogba who was sat deep.

France took a well-worked free kick (“straight from the training ground,” like some commentators would say) and it ended up with Martial’s headed effort crashing off the crossbar.

Patricio was lucky again but Martial needs to start taking these chances.

Especially if he’s to keep Olivier Giroud out of Didier Deschamps’ France side.

France have been the better team in the first half, with Griezmann being their standout player.