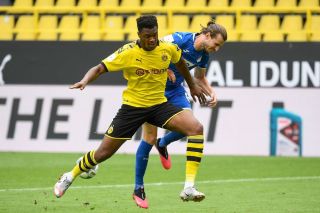 Manchester United need another centre-back and a new name is doing the rounds this morning.

Borussia Dortmund’s Dan-Axel Zagadou is the latest to be linked with a move to Old Trafford, and it doesn’t come as a surprise once you hear his contract expires in 2022.

The 21-year-old looks like another Dortmund starlet built for the future.

Zagadou joined BVB in 2017 on a Bosman from Paris Saint-Germain (via Transfermarkt).

Currently absent due to a knee injury, the French youngster has played plenty of football in Dortmund’s first team having already made 60 senior appearances for the club.

With 11 Champions League appearances under his belt, Zagadou has grown in the wonderful system at Dortmund which allows young players to experience elite football and develop into better players.

And it’s a name we’ll be watching out for once he returns from injury.

Dan-Axel Zagadou is spotted on the training pitch. He has played 26 Bundesliga minutes since March after overcoming a ruptured knee ligament but was yet to feature this season due to ongoing knee problems that sidelines him since the summer prep. https://t.co/Nv1MlokU85

United should be keeping an eye on every promising centre-back in Europe and get one in next summer. At the same time, Phil Jones and Marcos Rojo both need to be moved on.

Time to build from the back!