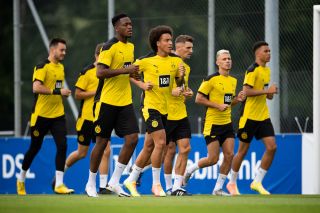 Manchester United are rumoured to be monitoring Dan-Axel Zagadou.

An imposing central defender with pace is what Manchester United need and there’s one at Borussia Dortmund who we should keep an eye on when he fully recovers from knee injury.

The 6Ft 4In centre-back was snapped up by BVB from Paris Saint-Germain in 2017 and he’s grown as one Dortmund’s of their best defenders.

I would be surprised if United didn’t sign a centre-back next summer and Zagadou is not the only defender from the Bundesliga we should be looking at. Earlier this week I wrote a piece on Bayern Munich deciding not to give Jerome Boateng a new contract with plans to target RB Leipzig centre-back Dayot Upamecano instead.

Upamecano is another French defender that United should be all over.

The Zagadou reports have stepped from Calcio Mercato in Italy, so it might give you some relief over the international break that there are defenders out there who could improve this United side.

In fact, there’s plenty of them.

The video below shows some of Zagadou’s best bits in a BVB shirt.

However, I would like nothing more if United didn’t need to spend big on a centre-back next season because Axel Tuanzebe proved himself over the course of the campaign.

We’ve not seen a lot of Tuanzebe since his brilliant performance against PSG — and it’s always going to be difficult for a player to perform when he’s in and out of the team.