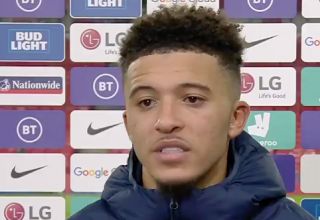 Every man and his dog knows about Manchester United’s failed pursuit of Jadon Sancho last summer.

Sky Sports did a Transfer Talk segment explaining why the club failed to sign the England international, which we have attached below for you to watch:

There was a lot of excitement at the beginning of the summer because it looked like United were on the verge would sign England’s most promising star, and he scored during the week for Gareth Southgate’s side against the Republic of Ireland.

However, in hindsight, Manchester United may not look back at the summer in regret over missing out on Sancho. They couldn’t agree a price with Borussia Dortmund who wanted crazy money for their most prized asset and, on top of that, his form this season has been a concern in Germany.

When I watch Borussia Dortmund there’s one player who stands out as the real star. That’s Erling Haaland but Jude Bellingham also looks like a player United might regret not signing after the midfielder joined Dortmund from Birmingham City in the summer.

Sancho has shut down the suggestion his slow start to the new campaign was because he failed to move to United in the summer transfer window.

“Nah, I don’t think so,” he told ITV Sport after England’s 3-0 win over Ireland.

“I feel like every player has a little dip in their career, and I feel I’m going through that at the moment. It is just how I’m bouncing back and I am just happy to have managers who have faith in and keep sight of me.”

Let us know in the comments section if you think United should make a move for Sancho in January?