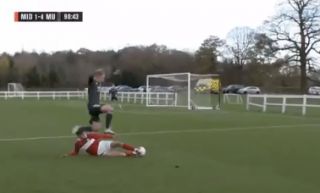 Isak Hansen-Aaroen opened his account for Manchester United after scoring in the 4-1 win over Middlesborough on Friday.

The 16-year-old joined United in the summer from Norwegian side Tromso and he is already making a big impression in the club’s youth teams.

It is worth noting that Hansen-Aaroen became Tromso’s youngest ever player at the age of 15 years and 319 days (via Manchester Evening News) and now, at 16, he is playing for United’s U18s as well as the U23s side in the EFL Trophy — scoring in the penalty shoot-out win against Rochdale.

The playmaker has now grabbed his first goal from open player for the club.

United were already leading 3-1 when Hansen-Aaroen got away from a sliding tackle attempt to win the ball towards the edge of the box. He then sent another defender to the shops and back with a deft feint and hammered the ball into the corner.

He just turned 16 and made his professional debut at 15 we’ve got another star in the making. pic.twitter.com/LFquQ1toDd

Fans have been raving about the goal on social media.

Our academy is stacked and i love it.