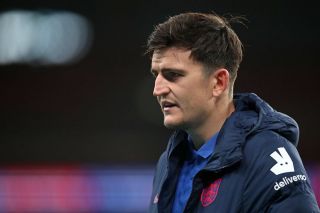 England defeated the Republic of Ireland 3-0 in a friendly match on Thursday night.

Harry Maguire was named as captain by Gareth Southgate before the game and he scored England’s first goal against the Irish with a header directed past Darren Randolph.

“An hour to captain my country last night,” Maguire tweeted on Friday. “A real proud moment.”

It’s been a difficult few months for Maguire but we hope this is the turning point for his season.

When the media are on your case, as we’ve seen with Mason Greenwood, it’s difficult to shake off and completely focus on your football.

Last season most United fans would agree Maguire came in and bolstered our defence, but 12 months on I think those same supporters still think we need a top centre-back.

That’s not a criticism of Maguire — or Victor Lindelof for the matter — but they are not very compatible together in a back four, are they?

Next up in the league for United is West Brom. Ole Gunnar Solskjaer needs his experienced players like Maguire to stand up and lead the way for what was always going to be a challenging campaign.

United have a lot of catching up to do.