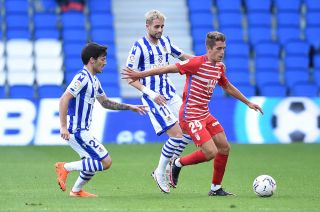 The news comes from Belgian publication HLN (cited by the Metro) after Januzaj’s difficult start to the La Liga season at Real Sociedad.

Januzaj, 25, is no longer a kid and has made just two starts for the Spanish side this season. Former Man City midfielder David Silva joined Sociedad in the summer and that sort of competition may help explain why Januzaj has had so little time on the pitch.

The has allegedly put the Premier League clubs in question on high alert because the prospect of moving to a top flight club in England and getting more game time will likely appeal to the Belgium international.

However, it doesn’t sound like Sociedad want to sell Januzaj as the HLN report suggests they want to give him a new contract to extend his current deal past 2022.

Back to where it all started for Januzaj

He came through United’s youth system and broke on the scene as an exciting talent. Sadly the high hopes fans had for Januzaj didn’t last very long and a failed loan spells at Borussia Dortmund and Sunderland would lead to him being sold to Sociedad in 2017.

It’s clearly not a decision United regret and I wouldn’t expect him to be seriously linked with the Reds, even if he looks for a route out of his present club.