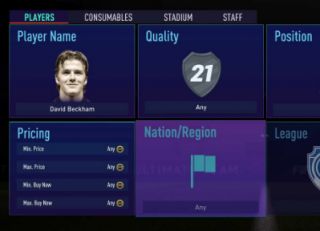 David Beckham may be retired but gamers will be able to play him with and against football’s modern stars with FIFA 21. One of football’s biggest icons has been added as part of a new title update.

Manchester United legend Becks could soon be in the Gold Packs via FIFA 21 Ultimate Team.

A FIFA 21 fan account on Twitter – @FIFA21_Daily — shared a picture of Beckham coming up in the FIFA 21 Ultimate Team transfer market filter.

Check out Beckham’s skinhead in FIFA 21 below:

On top of that, it looks like they’ve added singer Dua Lipa to the game and she’s got a better face scan than Mason Greenwood. Priorities, eh?

Will you be getting FIFA 21 on one of the Next-Gen game consoles?