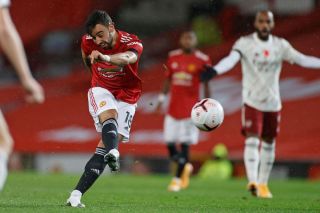 Bruno Fernandes, in my opinion, is the best post-Ferguson signing for Manchester United. When he speaks you know he’s desperate for Premier League success.

As we approach his one-year anniversary (in January) at the club, the Portugal international has featured on the official Manchester United podcast.

Fernandes may not be able to inspire Paul Pogba but he has looked like a catalyst ever since he wore the red shirt for the first time.

“Normally when I finish a game, I come home and it’s difficult to sleep because of all the energy and also all the caffeine you take before the game to give you energy, all the Red Bulls you drink, and so it’s difficult to calm down, so I come back home and start watching the game,” Fernandes told the UTD Podcast.

The excitement we have around this player — as fans — is totally justified.

After joining United at the start of the year he helped Ole Gunnar Solskjaer’s side turn their season around. We finished third and qualified for the Champions League — a feat that was unthinkable when Fernandes signed.

It’s been a long time since we’ve had a player willing to grab games by the scruff of the neck and he has done that from day one.

On top of that, Fernandes is a winner.

“I always said the same thing — for me, to come to a club like Manchester United is the same as why I went to Sporting, it was to win trophies. I come to Manchester with the same mentality.

“For me, it doesn’t matter about the other teams, people say they are better than us, they have a better first XI than us, the guys who come from the bench are better… people can say what they think, I don’t care. For me, I came to Manchester to win trophies. You are playing for one of the biggest clubs in the world. This club has made history in the past — an amazing history. For a club like Manchester United, it’s a long time since we won the Premier League. It’s too long, I think.

“So you have to have in your mind — all the players, all the staff — we are here to win. And I think we have that mentality.”

In another segment from Fernandes’ podcast appearance, covered on the blog, Fernandes reveals which former Manchester United player Fred should watch closely and take influence from.