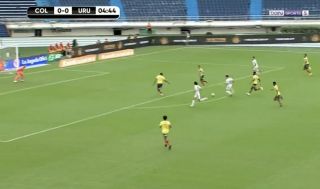 It took Cavani less than five minutes to stamp his authority on tonight’s important all South American affair.

The elite forward who opened his United account last weekend during his side’s 3-1 victory over Everton has continued his impressive form tonight.

Almost in a virtually identical position as he was against Everton, Cavani wrong-footed the Columbian keeper and opted to tuck the ball into the far right corner of the net.

United will certainly be hoping Cavani can come through tonight’s unscathed and carry his goalscoring form into the next set of domestic fixtures.