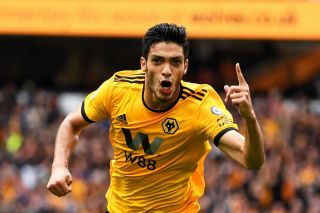 Wolverhampton Wanderers’ striker Raul Jimenez has opened up about those summer rumours linked the Mexican to Manchester United.

Jimenez, 29, joined Wolves in the summer of 2018 from Portuguese side Benfica on a season-long loan before making his switch permanent for £34.2m the following season, as per Transfermarkt.

Wolves’ Mexican marksman has risen to become of England’s most prolific strikers after netting 48 times in 108 matches in all competitions for Nuno Espírito Santo’s side.

Given the impressive two seasons Jimenez has enjoyed, his Wolves future has been subject to much speculation with summer suggestions he could have been set for a domestic switch to United.

A summer report from RTP claimed that Jimenez was set to team-up with Ole Gunnar Solskjaer, however, United remained consistent in their stance that they had not made an approach, as reported by Manchester Evening News.

However, speaking whilst on international duty, Jimenez has himself spoken and addressed those rumours, whilst speaking to TUDN, as quoted by Goal, the 29-year-old said: “One day I woke up and Juventus wanted me, another Manchester United and what I know is that there were approaches made. But an agreement was never reached and nothing was close. I’m very happy at Wolves.”

Jimenez went onto admit that he is happy with life at Wolves but refused to rule out a future move, he said: “The truth is I am very happy in Wolverhampton. It’s never wrong to be in a place where you are well but they know that I am not satisfied [with my form], I always look for more.

“It (a move) did not happen this time. If it happens at some point then it will have to be what is best for me, for Wolves and the team that I join. But I am very happy at Wolves and being considered a very important player.”