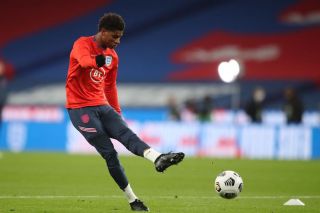 Marcus Rashford has wished his England teammates good luck after withdrawing from the England squad for Nations League matches against Belgium and Iceland.

Rashford missed Thursday night’s 3-0 victory over the Republic of Ireland at Wembley but hoped to feature for Gareth Southgate’s side in the two upcoming fixtures.

But he will instead remain with Manchester United after withdrawing entirely from Southgate’s squad through injury.

The extent of Rashford’s injury is not yet known but it became clear that he picked up a knock in United’s victory over Everton at Goodison Park.

Ole Gunnar Solskjaer embarked on a furious rant after the game about the scheduling of the fixture after a Champions League tie in Turkey just three days earlier, and noted that Rashford ‘looked in a bad way’.

“I can’t say enough how hard these times are for everyone, not just footballers, and we want to see football with quality,” Solskjaer told BT Sport at full-time, as quoted by the Manchester Evening News.

“I pushed my club to really fight the kick-off time on this one to give us at least half-a-chance, but it was quashed.

“Hopefully the injuries are not too serious but they [Shaw and Rashford] looked in a bad way towards the end.”

Rashford’s injury is worrying but perhaps the break before domestic football returns is positive as he looks to return to full fitness again.

United face West Brom next Saturday at Old Trafford and hopefully the England international will be available for selection as Solskjaer’s men aim to arrest their woeful home form.

Rashford sent a defiant message after his withdrawal from the Three Lions camp and also congratulated United teammate Dean Henderson, who made his England debut against the Republic of Ireland.

Yes Deano!! Gutted I couldn’t have been a part of it with you ♥️