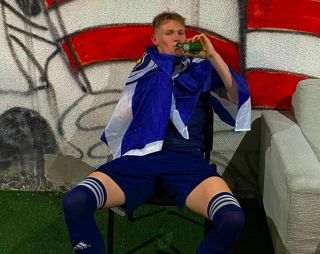 What a night for Scott McTominay and Scotland.

The Manchester United midfielder has helped his country end an agonising 22 years of hurt by qualifying for next summer’s European Championships in dramatic fashion.

The Scots defeated Serbia 5-4 on penalties to secure their first spot at a major tournament since 1998.

David Marshall will be remembered as the hero for saving Aleksandar Mitrovic’s spot-kick, but McTominay played an important role for Steve Clarke’s men.

The United academy graduate switched off for Serbia’s equaliser late on but was otherwise superb in an unfamiliar central defensive position, and stroked home his penalty with such confidence after a gruelling 120 minutes.

McTominay will relish playing on the international stage next summer and the Scots will take on England in a group stage showdown at Wembley which promises to be a great occasion.

Marshall’s stunning save to seal Scotland’s place prompted wild scenes on the pitch and McTominay was euphoric in victory.