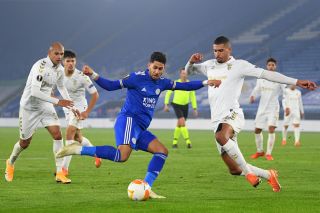 Manchester United are reportedly interested in signing Braga’s highly-rated left-sided centre-back David Carmo but will need to offload at least one of Marcos Rojo or Phil Jones before any approach can be made.

Carmo, 21, joined Braga’s youth academy in 2015 and after climbing the Portuguese side’s youth ranks has gone on to emerge as one of Europe’s most promising young defenders.

The left-footed defender who is also capable of operating as a defensive midfielder has featured in 27 matches in all competitions during his eye-catching breakthrough for Braga.

However, despite featuring in less than 30 senior first-team matches, the Portuguese defender is reportedly catching the eye of some of Europe’s biggest teams, including United.

According to a recent report from ESPN, Ole Gunnar Solskjaer is one of many top managers to express an interest in the talented Braga defender.

ESPN’s report claims that alongside United are a number of other English clubs interested with AS Roma and Fiorentina both keen on Carmo during the summer.

However, the report does acknowledge the fact that United are more likely to make an official approach if they can successfully offload at least one of either Rojo or Jones.