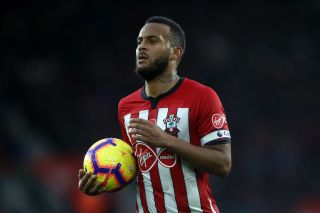 Bertrand, 31, joined the Saints after making his switch from Chelsea permanent in 2015 and has since gone on to become one of England’s most reliable left-backs.

Including a previous loan spell, Bertrand has featured in a total of 214 matches in all competitions for the Saints and has an impressive 27 direct goal contributions to his name.

Bertrand’s Southampton have started the new 2020-21 campaign in fine form and although on a short international break, currently find themselves at the dizzy heights of fourth place in the Premier League table.

Ahead of his side’s exciting domestic clash against Ole Gunnar Solskjaer’s United at the end of the month, Bertrand, who spoke exclusively to Stretty News revealed what he is expecting from the game, he said: “Manchester United are a great club with great individuals, it will be a tough game for us.

“They have shown some inconsistency but when they get it right they have had some amazing results.”

Bertrand went onto admit the Reds’ counter-attacking threat is a concern and highlighted the two United players who he believes will pose the biggest threat to the Saints’ back-line, he said: “The threat on the counter is their biggest threat.

“They have many great individuals, [Marcus] Rashford, [Bruno] Fernandes seem to be their top performers so far.”

Southampton are set to host United in the Premier League on November 29 with the match scheduled to kick-off at 2pm UK time.