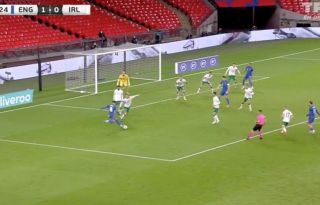 The talented winger was heavily linked with a move to Manchester United in the summer, as per BBC Sport, though a deal never materialised and there has been worrying claims in Germany about Sancho’s performances since the new season began.

Perhaps Borussia Dortmund will live to regret asking for such a steep transfer fee and we’ll move on to agree with United’s stance not to fork out north of £100m on his signature (via Daily Mail).

Who knows? Only time will tell but he took his goal very well against Ireland tonight.

Aston Villa’s Jack Grealish plays the ball out wide to the left before Sancho cuts in and sends the ball through a defender and Ireland’s goalkeeper Darren Randolph to make it 2-0.

United captain Maguire opened the scoring with a header.

Watch the goal below – pictures from TFX:

England’s Twitter has also shared a video of the goal, as seen below: