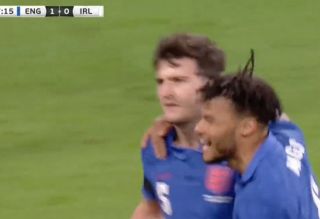 England have scored against the run of play against Republic of Ireland thanks to Manchester United captain Harry Maguire.

The centre-back has endured a difficult number of months in the media spotlight, but tonight he was given the captain’s armband for his country and just opened the scoring against Republic of Ireland.

Maguire’s goal came 18 minutes in and although there hasn’t been many chances, Stephen Kenny would have been happy with his side up until they went behind in the match.

This should give Maguire a much needed boost.

Watch the goal below, footage courtesy of TFX:

He wins the ball well in the air before sending the ball past Ireland goalkeeper Darren Randolph to make it 1-0 at Wembley.

We need to see Maguire winning more balls in the opponents box. Not only winning but converting because it’s crucial to every successful side to have goals coming from players all over the pitch.