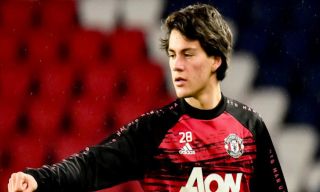 Both Pellistri, 18, and Diallo, 18, signed for United on deadline day earlier this year but Diallo not expected to join up with the Reds until January due to passport and work permit delays.

The young attacking duo have been tipped for great things after impressive youth careers at their respective former clubs.

Pellistri has joined from Uruguay side CA Penarol and was directly involved in six goals from senior 37 matches and Diallo, who joins from Atalanta has 62 direct goal contributions from 96 games in all competitions.

However, despite the excitement surrounding United’s two new teenagers, senior football reporter Marshall has warned fans not to expect too much from the attackers just yet.

Speaking during a Q&A session, Marshall said: “United have very high hopes for both players, but right now they’re not the right-wingers needed for the first-team.

“Pellestri has only just arrived and Diallo doesn’t arrive until January, it’s too much to expect either to come in and start making an impact on the first-team.

“In the next 12 to 24 months perhaps they could do that, but whether they can reach Sancho’s level is difficult to say. At 18 he was already playing regularly for Borussia Dortmund, so they both have some catching up to do.”

United missed out on landing number-one summer target Jadon Sancho after failing to agree terms with Borussia Dortmund, but German outlet BILD think the Dortmund attacker could still be eyeing a move to Old Trafford.

BILD claim that Sancho’s recent dip in form which has seen him fail to score in his last six appearances could be a sign of ‘farewell form’, suggesting the 20-year-old winger has his heart set on a move to United.

However, Sancho is not a United player and whether or not he ever will be remains to be seen, but with Pellistri already training alongside the first-team and Diallo now just weeks away from joining, the youngsters will have the total backing of the United faithful.