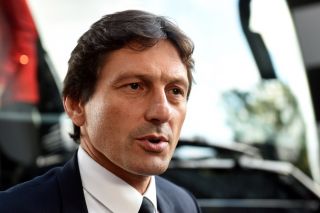 Paris-Saint Germain sporting director Leonardo has made a stunning statement regarding the club’s decision to allow Manchester United striker Edinson Cavani to depart the club after his contract expired.

Cavani, 33, joined United on a free transfer in the summer after his deal with the Ligue 1 giants expired earlier in the year, the South American’s move was confirmed on the club’s official website ManUtd.com.

After joining, United’s new marksman was forced to remain sidelined due to COVID-19 rules but now fully fit and available for selection, the Uruguayan striker has already featured in five matches in all competitions.

The former Paris-Saint Germain striker has already opened his United account after scoring his first goal for his new side during last weekend’s’ 3-1 victory over Everton.

However, despite United’s new number-seven leaving Paris-Saint Germain nearly four-months ago, the French giants’ sporting director has made a shocking recent admission that allowing the 33-year-old to leave could have been a mistake.

Speaking on Paris-Saint Germain’s official club site, as quoted by BeIN Sports, Leonardo said: “At one moment, we have to say ‘what are we going to do?’

“We spoke clearly with them [Thiago Silva and Edinson Cavani]… It was a moment where we could not give them exactly what they wanted.

“It was a financial and generational problem. It was the moment to count on Marquinhos and [Presnel] Kimpembe. The decisions were difficult to take.

“Aside from that, we could have made a mistake.”

Were Paris-Saint Germain wrong to let Cavani leave for free? Should the French champions have renewed his deal? – Let us know in the comments.