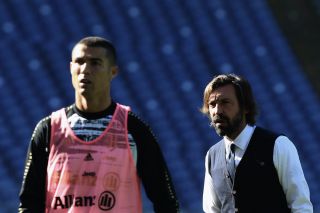 Do you believe everything you read?

At Stretty News we try to bring you Manchester United news from all over the world. There’s always a mixture of credible journalists, questionable outlets and bogus social media accounts impersonating football hacks.

We share the news as we see it — and often reveals snippets of what we learn from talking to those involved in the game.

But today we have something that takes the biscuit.

We can note that Manchester United are circus esque off the pitch, run at large by businessmen who wouldn’t know a football if one slapped them into the face, so there is probably someone behind the scenes who got giddy after unpacking Cristiano Ronaldo on FIFA Ultimate Team.

Well, here it is… The Mirror claim United have made a formal offer to Ronaldo’s agent amid claims he won’t be signing a new deal at Juventus.

The report confirms that the 35-year-old striker currently earns £28m-per-season and Juve would like to remove him from their wage bill.

This wouldn’t be the best use of United’s resources — but they usually end up in Glazer pockets anyway.

Credit to popular United fan Rob Blanchette who nailed it on Twitter.

This may come as a surprise to a few readers, but I don’t think United need Ronaldo right now. Of course arguments can be made in favour of a return and the romance behind it is well and truly alive, but logically thinking we need to move beyond this temptation.

There is lots of things United need before committing a sum of money that would put so much pressure on the wage bill to such an extent that it would likely prevent us from buying the fresh talent we need.

The club will sell football shirts but I don’t think on the pitch it would make the difference we may dream about.

It’s not clear what United’s offer would be because there won’t be one.