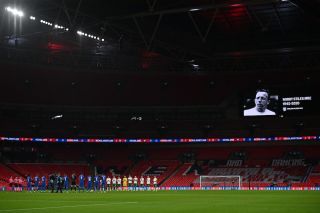 A minute silence was held at Wembley Stadium tonight before England’s international friendly against Republic of Ireland.

Nobby Stiles, the only Mancunian to win the European Cup and World Cup, passed away on October 30.

A tribute flag was unveiled at Wembley tonight in the stands, as pictured on Twitter via Stretford End Flags:

Usually, such a flag would be held by fans in the stadium but COVID-19 has prevented that from happening tonight.

The Premier League, however, is said to be in plans with the the Government over a blueprint to add COVID-19 vaccine records to a digital health passport which may fast-track the return of crowds in 2021.

Two first half goals from Harry Maguire and Jadon Sancho gave them the lead going into at the break, but Dominic Calvert-Lewin made it three from the penalty spot.