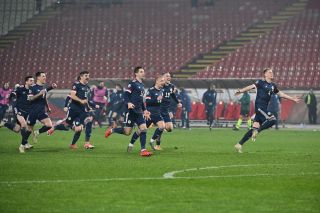 The wait is over for Scotland after 22 years of hurt.

David Marshall will be the hero in Scottish newspapers tomorrow morning, but we won’t be forgetting Scott McTominay’s penalty anytime soon.

“It was never going to be easy,” Marshall said after the game, as per The Sun.

“We had to see out two or three minutes at the end, and then to come back the way we did.

“The first hour of the game we were completely dominant, and the second goal was just not coming.

“I’m just lost for words at how well the lads turned that pressure around once they got the equaliser.

“The managers, players, Robbo speaking, it just changes the mentality.

“The last three or four games we have gotten that belief of winning games and keeping clean sheets but I don’t know how we done it; but we deserved it.

The Manchester United midfielder played well on the night, although he was guilty of napping for Serbia’s equaliser, and he will be delighted to have the Euros to look forward to next summer.

Scott Mctominay masterclass for Scotland tonight in a do or die European tie but no one will talk about that 👍👍👍 pic.twitter.com/nBkuUICwqy

After full-time the match was level at 1-1, which saw no change during extra-time and led to a penalty shootout.

Full shootout below – pictures via L’Equipe:

There were unbelievable scenes as the players and coaching staff celebrated on the pitch.

P.S. Scotland deserve great credit for this celebratory tweet below:

McTominay has become an influential player at United and going to the Euros now will do him the world of good. It will be a fantastic experience and only he could only dream about since registering for Scotland.

Now it’s reality and much deserved for all his hard work in United’s first team.