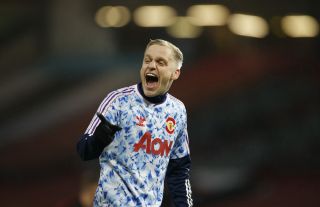 Manchester United midfielder Donny van de Beek has lifted the lid on what manager Ole Gunnar Solskjaer has told him after his £39m move from Ajax.

Van de Beek, 23, joined United from Ajax earlier this summer on a five-year deal, as per Sky Sports.

However, since his arrival, the versatile midfielder has failed to start a single Premier League match with all of his starting-11 inclusions coming in cup competitions.

United’s decision to ease van de Beek in has sparked critism from pockets of fans and pundits alike with the most notable critic being former United left-back Patrice Evra.

Evra, who spoke recently on Sky Sports, as quoted by Metro said: “We’re talking about Van de Beek… why did we buy him?

“I have nothing against the kid, but why did we buy Van de Beek?

“He’s watching the game from the stands every game because we don’t need him. That’s the truth, but people will not say it loud.”

However, currently on international duty and after bagging his country’s equaliser during last night’s match against Spain, van de Beek addressed recent concerns he isn’t getting enough game-time under Solskjaer.

The 23-year-old who spoke to TV broadcaster NOS, as quoted by Metro said: “It sounds like a cliche for me to say this, because of course I would have liked to play more, but I really enjoy being in a nice team,

“I have been received very well and helped by everyone.

“I’m a patient person but of course you go there to play as much as possible.

“I also think in the minutes that I have played, in the times that I have come in, I have shown that I can add something to the team.”

When asked, van de Beek went onto reveal exactly what Solskjaer has told him after his arrival at the club, he said: “That I have to be patient but also that I just have to continue with what I have been doing.

“And that he’s seen that I have a good impact when I come on to the pitch.

“My time is definitely coming. And when those opportunities come, I have to be there.”

Given team-mate Paul Pogba’s dire run of form, van de Beek could be set to nudge the French World Cup winner out of the squad and potentially out of the club all together as rumours persist that Pogba could be on the way out.