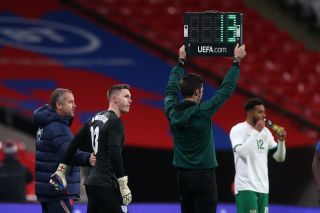 Dean Henderson is not only seen as the future Manchester United No.1 but Gareth Southgate will be hoping he can remain England manager to see him at his best.

Tonight Henderson’s international career at senior level began with a 3-0 win over Republic of Ireland in an international friendly.

Burnley goalkeeper Nick Pope started the game against the Irish, but Henderson replaced him during the second half.

Dean Henderson made two saves and secured a clean sheet on his senior England debut 🧤 pic.twitter.com/ccfvT7Ty9T

According to ESPN, Henderson could leave United on loan again in January. He is currently second choice to David de Gea who has been good this season.

It would make sense for him to go out and gain first team experience but I’m not sure how long he will stay at United now that he’s knocking on England’s door and is clearly good enough to start for most teams in the Premier League.

Wolves are the only club said to be interested in taking Henderson on loan, as per ESPN, and they are a very side where the standards have been set high by manager Nuno Espirio Santo.

England won the match 3-0 thanks to goals from Harry Maguire, Jadon Sancho and Dominic Calvert-Lewin.