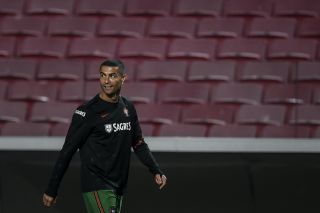 Wolves is a better suit for Cristiano Ronaldo than Manchester United, according to Troy Deeney.

There is doubts over Ronaldo’s future at Juventus and The Mirror claims United have made a formal offer to Jorge Mendes, the Portuguese superstar’s agent, who is renowned as one of the most successful men in football business. Juventus are said to be looking at balancing the books and by getting rid of Ronaldo that will be a lot easier to achieve and manage.

That is one reason I am against the idea of entertaining these rumours. United have bigger concerns right now than inflicting more by signing a 35-year-old earning €28m per season.

However, Troy Deeney doesn’t think that Ole Gunnar Solskjaer’s team will be Ronaldo’s next destination if he makes a Premier League comeback.

“I would more look at a club like Wolves with the Portugal connection — that would work,” the Watford striker told talkSPORT.

“Whoever is getting him is still getting an unbelievable talent.

“You’re not going to get the same Ronaldo you had at Man United. That’s always going to be there comparison.

“You look at Gareth Bale now, for example, he’s gone back to Tottenham and you’re already comparing him to the one that left.

“You’re still going to get goals from Ronaldo, but he’s got to get a season of 30+ plus goals — that’s always gong to be at the forefront of everybody’s mind… can he reach that level again?

“He’s getting older but he’s great in the air and he doesn’t look like he’s slowing down.

“Physically he’s a beast and from a marketing perspective he adds so much value to whatever club he goes to, so shirt sales would go through the roof.”

Along with manager Nuno Epirito Santo, Wolves also have nine players from Portugal so the connection is there but there would be a number of factors behind such a deal.

Could Wolves justify paying a 35-year-old more than the rest of their players?