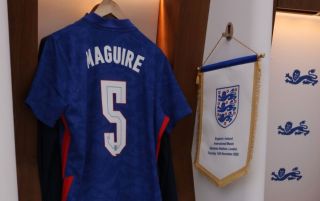 Harry Maguire will captain England tonight against Republic of Ireland at Wembley.

England’s fringe players will get a chance to impress with an experienced Maguire leading them out from the beginning.

The Manchester United centre-back has struggled this season but it’s good to see Gareth Southgate give support during a time he needs it.

Here's how the #ThreeLions line up for tonight's game against Ireland! 📋 pic.twitter.com/DiUpJbmryi

It’s a friendly so I wouldn’t be expecting much. On top of that, you have to go all the back to the 1988 European Championships to find a fixture between these nations with a winner, Ireland winning 1-0.

Scott McTominay starts for Scotland in their Euro 2021 play-off finals clash against Serbia.

It’s a golden opportunity for McTominay to bring a great degree of pride to a nation and after a difficult start to the season for United and his teammates, I’m sure we aren’t alone in wanting to see him come away from the game with a smile across his face.

Your Scotland team taking on Serbia in Belgrade this evening.

Daniel James has been named on the bench for Wales.