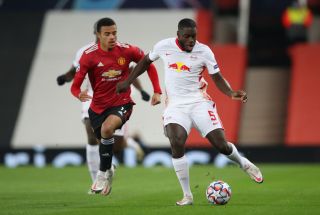 Manchester United have been linked with a plethora of central defenders because it’s pretty clear that they are lacking in quality at the back.

The one that’s excited us most is France international Dayot Upamecano — who had an incredible Champions League campaign with RB Leipzig last season.

However, United fans probably scratched their heads when Ole Gunnar Solskjaer’s side put 5 past Leipzig in the Champions League this season, but the German outfit just couldn’t deal with us on the night.

A release clause worth €42m next summer is an attractive pull factor to Upamecano and United are in desperate need of a top centre-back.

German journalist Christian Falk claims Bayern Munich will make a move for Upamecano after deciding not to give Jerome Boateng a new contract.

after the decision that @JeromeBoateng will leave the Club in summer: Bayern is interested in Dayot Upamecano @BILD_Sport

Boateng, 32, will be available on a Bosman and Falk thinks Arsenal, Chelsea and Spurs are interested.

It seems predictable that Upamecano will end up at Bayern as one of the Bundesliga’s best up and coming defenders but I would like United to at least sound him out.