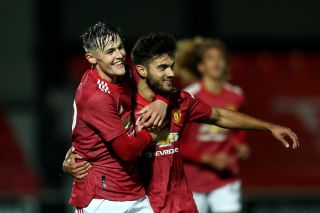 Barcelona are reportedly keen to try and sign Arnau Puigmal from Manchester United as early as January as the youngster’s new contract proves to be a sticking point.

Puigmal, 19, joined United’s youth academy during the summer of 2017 for an undisclosed fee after making the switch from Espanyol, as per Transfermarkt.

According to a recent report from Spanish outlet Sport, La Liga giants Barcelona want to try and lure the highly-rated youngster back to his homeland.

The youngster’s contract is set to expire as early as next summer as Barcelona are reportedly set to try and capitalise on the teenager’s current situation.

Puigmal, who primarily features as either a midfielder or a right-back is United’s under-23s top goalscorer thus far, this season after scoring three goals which puts him level with talented striker Joe Hugill.

It is understood that Barcelona B coach Garcia Pimienta is an admirer of Pugimal’s versatility as he seeks to reinforce the side’s right-back area as the Spanish outfit remain confident they can land the 19-year-old.

Sport’s report does go onto claim that the versatile youth prospect would welcome a move back to Spain after his spell with United has seen him grow in maturity.