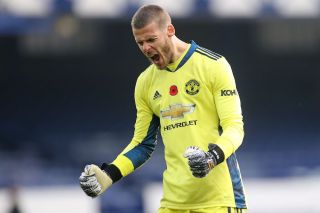 In the latest episode of the Manchester United podcast produced by Manchester Evening News, David de Gea and Luke Shaw and both singled out for positive reasons even though it’s been a traumatic start to the campaign for the Red Devils.

“Players like De Gea and Luke Shaw have risen to the challenge this season,” says MEN reporter Tyrone Marshall.

We couldn’t agree more because De Gea has hardly put a foot wrong when, prior to the new season, many were guilty of writing off the Spanish defender in favour of Dean Henderson.

Henderson has come back from his loan spell at Sheffield United as number down, pushing Sergio Romero down the pecking order at Old Trafford, although ESPN think the young English goalkeeper could leave the club again on loan in January.

But there’s definitely some truth in what Marshall said on the podcast, which you can listen to in full here.

📹 @RichFay, @DomBooth19 and @TyMarshall_MEN discuss the benefits of having competition for places in the #MUFC squad this season.

On the other hand, Shaw, who has been ruled out for up to a month with injury, has also risen to the occasion. He’s been criticised for not being very good at getting forward and providing assists for his teammates, but Shaw provided assists in consecutive games against Istanbul and Everton.

Let us know what you think of the United duo this season in the comments section.